Royal Ruckus is a hip-hop group that was formed by three high schoolers in Bakersfield, California. Their journey together has led them through a number of albums, including a record deal, a massive double album, and numerous tours throughout the country, and internationally.

Q: What made you realize that music was your path?

A: Oh, I don’t know, I’ve just loved music for as long as I can remember. At some point, maybe around 12 years old, I decided I wanted to make music professionally, and I started writing my old songs. I actually even wrote letters to a few rappers asking them for advice. One of the lesser known groups actually wrote back to me, hand written letter in the mail and everything. It was awesome.

Q: How would you describe the music that you typically create?

A: We try to make catchy songs that will get stuck in your head, most of them fun, some of them sad, but with the endeavor that all of them are original and connect with your “average Joe” human being. The music is reminiscent of classic hip-hop, and the lyrical flows have a classic vibe, too. We like it fun, catchy, and something you can connect with.

Q: Who are your biggest musical influences?

A: I’m pretty eclectic in the music I listen to, but it would be hard to imagine me making music like I do without Beastie Boys, A Tribe Called Quest, and humorous old school rappers like Biz Markie, DJ Jazzy Jeff and the Fresh Prince, and the Fat Boys. And I always credit Benjamin Gibbard of Death Cab for Cutie with impacting my writing style, even though his music is the furthest thing from hip-hop.

Q: Has there been one particular moment in your musical career that you’re most proud of?

A: This question comes up a lot, and there is no easy answer, because we had so many amazing moments! Honestly, though, most recently I’m proud that we took a long hiatus from touring, and only put out a few demo-quality projects before last year’s return with The Summer of the Cicadas. And we had a bunch of loyal friends, family, and listeners step up and support our project. And that told me that we needed to get on the road and do this whole thing right. I’m so thankful to our supporters. 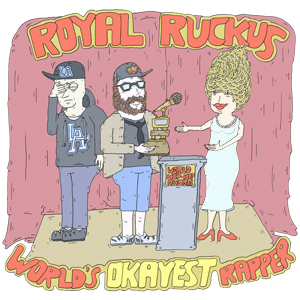 Q: Tell us about your most recent Royal Ruckus release, World’s Okayest Rapper?

A: It’s a fun, 7-song collaboration with CookBook from LA Symphony. Cook and I have known each other for years, and he’s been on a few songs of ours in the past, but it was great to put our heads together and work with him on production. The record is upbeat, thought provoking, and funny. It’s even my first record to feature a woman rapper! Check it out wherever you listen to good music: http://song.link/WOR

A; World’s Okayest Rapper is the first of a series of “Royal Ruckus Presents…” side projects, where I collaborate with other artists inside or outside the rap genre. I have two 5-song projects in the works that will be recorded later this year. I’m having lots of fun. All this, plus I’ll be going on tour later this year, and that’s always fun to get out there and get on stage and share my music in other parts of the country or world.

On top of all that, I also have a podcast, called Brews, Beards, & Shipwrecks, where we dive into other people’s stories, trials, and triumphs. You can check that out on iTunes, Stitcher, Castbox, or on the podcast site, http://brewsbeards.com.

Q: Would you like to give any message to your fans and upcoming artists?

A: To the listeners, thanks for your support, and sharing with your friends on social media goes a long way. We appreciate the retweets, the plugs, the shares, and so on. Thanks!

For up and coming artists, I’d say just be original, blaze your own trail, don’t just try to be what everyone else is doing.