ANS: Odds Lane has a blues/rock trio sound. However, with backgrounds in all kinds of music, a couple of bachelors degrees and masters degrees in Jazz Performance we include a lot more in our sound than what you might expect from a standard blues trio. Our sound is very much rooted in blues rock and funky R&B but I think JD Nash of American Blues Scene Magazine described it with this quote….“Brilliant, and sometimes darkly humorous, it is impossible to categorize Bongo Boy Record’s newest offering [Odds Lane]. We wouldn’t have it any other way.”

ANS: As far as the music we release it is all original but we pride ourselves in knowing and being able to play all kinds of music across genres. Our inspiration for writing music really steems from our deep love of multiple genres and being fans ourselves. For me, my favorite part of the process is being in the studio and bringing something you’ve nurturing for a few months by that time to life. Writing songs is often described as being like having children, if that’s so then the studio is the place where you raise them and get them ready to have lives or their own.

ANS: Well figuring out how to pay for it can be stressful but other than that I find the whole process very exciting. Other than being on stage in front of an enthusiastic audience it’s my favorite part of the process of songwriting. It’s where your songs really come to life! 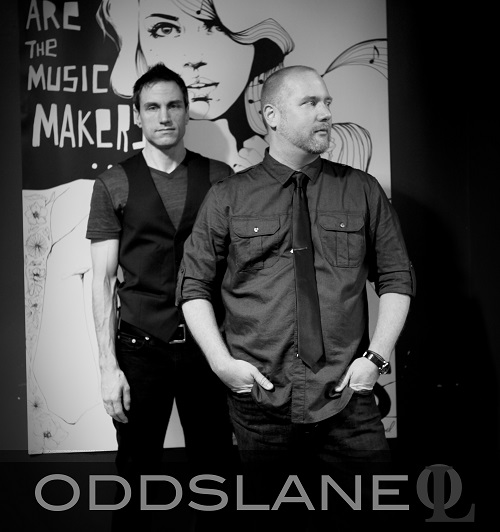 ANS: I personally started playing music seriously in 6th grade when my parents bought me a drum set for my birthday. I started taking drum lessons from a teacher my uncle, who was a high school band director, recommended. That’s where I meet Brian as a fellow drum student. When I decided to switch to guitar after my 1st band I was in as a drummer ended, I needed a drummer for my new band. I asked my uncle for the other “good” drummer from lessons phone number and the rest is history as they say.

Ans: Of course, we’re old so the 1st music I listened was on vinyl that my parents used to play on our home jukebox lol. The first album I ever bought with my own money as a kid was on cassette, Poison’s “Look What The Cat Dragged In”, I guess that’s dating myself lol.  However the tape that probably made the most difference in my musical development was something Brian gave me to try and get me to stop listening to all that “BS top 40 crap”. It was “Rush- Exit Stage Left” it was such an eye opener as a young grade schooler that there was a wider world of music beyond MTV. I don’t think if it wasn’t for that album I would have ever discovered Muddy Waters or SRV or even The Beatles. It literally was a record that changed my life.

Ans: I took a few lessons before my uncle sent my to my first real teacher after I had gotten that first drum set. I don’t remember any of their names though but that 1st drum teach was Cindy Klink and she was the 1st teacher I ever had, music or none music, that I felt was a “real” person and someone I admired because I wanted to and not because some adult in charge said I should. She taught me many things but most importantly she made all her drum students watch “Spinal Tap” one night after a recital rehearsal and I think that change more than one life that night haha.

Ans: I handle mistakes the same way I tell my students to by not worrying about. All musicians make mistakes, the best ones though never let you know about it. Preparation is the best preventative medicine. Knowing the material like the back of your hand allows you to adjust to whatever might happen onstage. After all mistakes often lead to the best musical moments!

Ans: Yes I’ve been teaching private lessons since 1999 and have been teaching at the college and university level since grad school in 2008. Teaching is often the best way they understand something better yourself.

Ans: Being nervous is human. It’s going to happen, but don’t let it stop you. Use it, make that feeling an asset not your enemy. Also the best way to get over stage fright is to be on stage as much as possible. Get a band together or just grab your instrument by yourself and get out there. Find an open mic, get into your schools battle of the bands, rent a hall, or set up on the street, just get yourself performing in some way!

Ans: Right now we are busy promoting our current album produced with our good friend and former band mate Mike Zito (Ruf Records – 2017 Male Blues Award Artist Of The Year nominee) and David Z (Grammy Winner – Prince, Fine Young Cannibals, Etta James). We have tour stops coming up in Cleveland, Boston, NYC, New Jersey, Cincinnati, Minneapolis, Springfield IL, Columbus OH, etc… with more tour dates to come (follow us at https://bandsintown.com/oddslane) Plus when we are not on the road you can find us in and around St. Louis most weekends we are home. We’ve already started writing for our follow up album to our current Bongo Boy Records release “Last Night On Cherokee” and should be hitting the studio this summer or early Fall.