Formed late 2013 in the Rio Grande Valley, Lonescar set out with the intention to make crushing metal music without boundaries. After putting in the work and playing numerous shows across south Texas, the band signed with Rock Angels Management in 2014 and shortly after began working on their first EP, Bloodluck at Sound of Rain Studios (Edinburg, TX) with producer Charlie Vela. Released in 2015, the groove and thrash influenced sound delivered by Bloodluck quickly won over fans and saw the band setting the foundation for a new wave of heavy metal. Performing alongside pro international touring acts such as Sepultura, Whitechapel, Darkest Hour, Havok, At All Cost, Extinction A.D., Black Fast, and more has primed Lonescar to deliver a vicious live performance that’ll get crowds moving.

Mike: It’s definitely a mix of both. Starting off it’s very exciting because you have all these new ideas flowing and you get to create and mold something that is essentially a part of you. It gets stressful in the studio when you really have to put things under the microscope and analyze everything from the tone of your guitars to the way you play your instrument. It’s kinda like having a kid; making a baby is fun as fuck (all the puns intended), but when you’re in the delivery room, “fun” is the last thing on anyone’s mind. Plus there’s usually so much blood. So much blood.

Mike: We all have different roles in the creative process, though nothing is concrete. Maybe that’s our formula? It works out well for us, and believe it or not, we’re still in the

process of figuring out that “Lonescar” sound. This EP is definitely the most accurate representation thus far, but the next release may just end up being a different beast altogether.

Michael: The inspiration is drawn from my subconscious. I will be playing guitar for fun, and out of nowhere, I start playing my own version of a riff or lick that I heard from the other day. Majority of the time, the inspiration comes from a mix of bands that I listened to in high school, such as Pantera, Motorhead, and Morbid Angel, so I guess that’s where that familiar, nostalgic sound shines though in Lonescar songs. My favorite part of the writing process is coming up with a spontaneous blueprint of a song from improv sessions, and then going back home to fine-tune the details.

J.C.: I purposely try to draw inspiration only from the group of musicians I’m writing with. I think that makes my parts as original and “tailor made” as possible.

Brian: The dudes in the band, our story we want to tell, and everyday bullshit. The feeling of being creative is probably my favorite part of it

Brian: Everyday life man. Everyone and everything. Creativity can be easily streamlined if you have the right channels

Mike: I pull inspiration from a lot of sources, and not all of them are musical. Sometimes an image or action conjures up a riff in my head subconsciously. Other times I’ll feel like throwing in a little Cliff Burton influence or something. I feel we all have those moments, but for the most part, we try to pull inspiration from each other.

Ans: Brian: FUCKING SLAYER!!! Dream tour would be another unholy alliance tour, but this time we’re the underdogs.

J.C.: Chimaira, Unearth, Devil Driver just bands that get me pumped up and motivated. Love them all.

Off the top of my head, I would say Lamb of God. Everybody in Lonescar is greatly influenced by Lamb of God in some way. I believe that they are one of the few modern bands that are carrying the torch for metal. Are music is somewhat similar, and I feel that our bands would get along. I can imagine grilling some chicken wings with Randy Blythe while we are all having a boozy hell of a time.

Mike: I would love to perform with Gojira. I really enjoy the “Evil Mario” videos they share on social media since it falls in line with the stuff we come up with, so I think a chance to work on one of those with them would be killer. 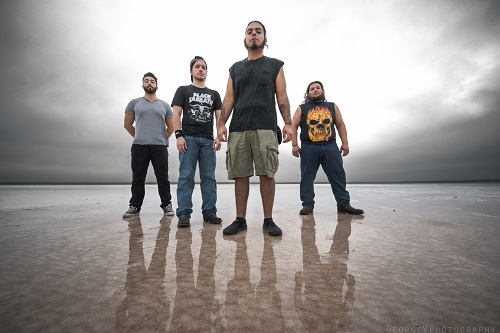 Ans : Brian: Shit man, Imagine, strength beyond strength, maybe some Frank Sinatra and Circa survive. I rather not have a soundtrack and just put my regular music playlist on shuffle, ha.

J.C.: It would be a ton of different music and very little of it would actually be metal.

Michael: I would just pop in the Detroit Rock City Movie Soundtrack and put that shit on repeat! It has everything that describes a day in the life of Michael Perez. Everything is all about having a good time, with a little bit of raunchy undertones. Also, I’m a sucker for all things KISS.

Mike: Type O Negative, Queens of the Stone Age, Gojira, damn, there’s too many to list. Those are just some of the artists that I would consider putting into that soundtrack.

Michael: KISS played a big role in my life and I gotta say that their entire discography influences me in one way or another.

Mike: All of them. I listen to anything, and avoid sticking with metal only. There’s a shitload of good music out there and I listen to anything and everything to dissect the musicianship and see what I like about it in particular. Sometimes I learn new things and apply them to my playing.

Ans: Mike: I think I speak for all of us when I say we work well with mistakes. None of us have ever frozen up on stage or stopped or anything ridiculous like that. If something is off, we’re quick to fix it. That’s just something you need to learn how to do if you want to be a pro act.

Ans: Brian: I still have a lot of learning to do before I can feel comfortable enough to teach, but I would love to in the near future.

J.C.: 6. Yes. I find that teaching people to play drums strengthens my technique and reminds me of the magic of drumming.