Mystah Spaulding and Grim Singmuf have emerged from the underground with an army of talent! Cesspool Asylum is a collection of artist who live all across the united states who have come together to create and share each others sounds. They currently have artists in Massachusetts, California, and Oregon. With 2 seperate Headquaters, one in Attleboro Massachusetts and the other in Weed California, the Cesspool Asylum is digging deep roots on both coasts!

What drew you to the music industry?

M.S.: What drew me to the music industry? well, I’ve always really been musically inclined. When I was younger, my mom was the Choir director at the church we attended
so when i got a little older, Music became my life. I’ve played guitar/sang for various bands. I found music was a great escape when I just needed a break.

G.S.: I’ve always loved music, when I was younger my desire was to learn guitar, my family was poor so that was out of reach. I wrote my first poem in 3rd grade as part of a homework assignment. It was then that I learned I come from a family of poets. As I grew so did my poetry, I would frequent this spot called Poamlands in Pawtucket Rhode Island with a rapper named “13th Deciple” who was also a staff member at a group home I lived in at the time. This was R.I.’s home of hip hop at the time and it was then that I was drawn to the Hip Hop scene. Music was always an escape for me, my best friend. I always wanted to create new vibes, I went from tapping on a table as a youth to beating on my Maschine MK3. Music and me were always “meant to be”…

Who are you inspired by?

M.S.: For me, it’s tough to say because I have so many diverse inspirations in music, it truly transcends the parameters of Genre. I suppose to name a few, Boondox, Jamie
Madrox, N.W.A., AnyBody Killa, Wu Tang Clan, a little bit of Eminem, and other stuff like Shinedown, The Beatles, and (if you can believe it lol) Louis Armstrong.
In all Honesty I could go on all day long about my inspirations and why exactly they inspired me haha.

G.S.: I’m inspired by life and death, and all that surrounds it. Life, love, stress, adventure, family, friends, enemies, earth, and so much more. Musically im inspired in many avenues, the answer to this question is complex, always in flux. More so than ever though, I find its my personal life experience that guides my inspiration, not just what I experience, but how I experience what I experience.

M.S. A lot of my music is based on how I’m feeling or What’s going on in my life. Mostly though my process creatively is very rigidly planned and executed. I often draw inspirations from everyday occurrences, for instance in my track “Suicide Note” I actually wrote that track after I got sent to a psychiatric Hospital program. Sometimes I’ll hop on a very SCUM-esque track (Very dark and greusome lyrics over savage beats) a lot of that revolves around people who’ve done me wrong in my life.

G.S.: This depends entirely on the mood. I like to have a little herb around, however I typically nurse my bong more than usual around these times, trying to get “right” not necessarilly “stoned”, but beautiful. Maybe I’ll load up my favorite drum pack and start tapping out rhythms, or Ill open up a soft synth and start creating new sounds. I eventually come to the point where I begin building my own patterns and loops, then I proceed to arrange them into a song. As far as lyrics are concerned, they come and go all the time at random, Its always been this way. I now carry around a digital voice recorder to capture those “spur of the moment” lyrics I would lose as a youth when a pad and pen were not in reach… Its trully about mood…

If we’re going to buy you a drink, what should it be?

M.S.: Usually, Guinness. However I also like to mess with some Rum and Coke.

G.S.: Kombucha, any flavor but preferably home made with some ginger. 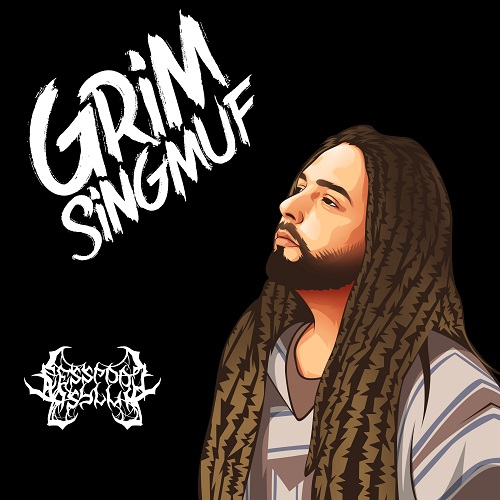 What did you start doing first, producing or rapping?

M.S.: I started Rapping and really only after I met Grim did I get into producing.

G.S.: For me poetry came first, then hand drumming and Harmonica. I began learning production in 2004, considered myself a beatmaker by 2005, But 2007 is where I really learned to dive deep into production and was finally able to transition my self from being just a “beat maker” into becoming a “novice producer” at this point I do not feel as if im an “expert” but Ive deffinitly gone beyond “novice”. Ive developed my own style that is very unique production wise.

What makes your music unique?

M.S.: What makes my music unique, on a personal level is mostly the flows, I always like to try new things with flow and pronunciation. Another piece as I mentioned earlier is my music is often drawn from my life and experiences, which i believe is different when compared to lots of other musicians that are my age. To sum it up I suppose is I’m always looking to push the envelope if you will and I’m doing it in my own way.

G.S.: I believe the fact that Im involved with each component is what trully gives me a “unique” vibe. I don’t “jack beats” I literally produce my own music down to the sound design, I create my own drum packs, I design my bass and other instruments from scratch alot of time. I never use a pre made loop, i create my own. I never just download someones hard work and try to place my voice on top of it, I own my DAW’s, I create my soundscape, I find my voice a place to live amongst these sounds. From the first sound to the last sound I am the creator, thats what makes me unique I believe.

What is one experience in life that, without it, you wouldn’t be the artist you are today?

M.S.: For me, that would be when Earworm Entertainment and I parted ways, Before then and even when I was on Earworm a bit I was young and a bit cocky I’ll admit. When EWE and I split I was devastated, and in that healing process I was reborn in a sense. These days I’m actually pretty Laid back and chill, very modest with my sole focus on my music and my fans, always trying to give the fans more and outdoing myself every line and every beat.

G.S.: My mom and pops copulating and deciding not to kill my fetus is first and foremost, but besides that I’d say my life on the road. I left group homes that I was forced to live in and decided on hitchiking and train hopping accross country, This really made me the artist I am today as it gave me many lifetimes worth of experience that most humans only find in books and T.V.

Which ingredient do you think is most essential in making your sound and style the way it is?

M.S.: It would be equal parts anger, outrage, love, Love for what I do and love for everyone That’s helped me get to where I’m at today. I do everything I do for the people who rock with Spaulding.

G.S.: “Life experience” with a dash of “knowledge of self”

Do you think the advent of internet and all the new technology has helped your music and independent musicians in general, or do you think it just creates a mass of mediocre “copycats” who flood the web, making it difficult to distinguish yourself?

M.S.: Typically, it’s a godsend. That being said, it unfortunately allows some Knuckleheads a platform that they probably shouldn’t be on.

G.S.: I believe it has helped me and many others, it creates more “ease of access” and with that you find the good and the bad. I feel as if I’ll always be different, as Im to complex a being for people to copy! However “mediocre copycat” types will always be there clowning around, downloading “type” beats of soundcloud and youtube trying to emmulate someone their not. This is inevetible in a society where the people lack knowledge of self, they are always in a state of “trying to be”. I find myself in a constant state of “becomming” and will continue on this path regardless of “copycats” and all that. I suppose my belief is that it helps both the independent artist as well as the clown who wants to be a copy cat clone and at the end of the day I will always be able to be unique cause im the primary creator of my craft.

In closing, tell us something about any projects and ideas you have in store or are already working on?

M.S.: We got ourselves a tour coming up, pay attention to the Cesspool Asylum website for details on that. You can find that at https://cesspoolasylumac.com/ you can also check up on what we got going on musically, for me that would be the EP that I have dropping on March 15th The Irish EP and we got other stuff getting ready to pop off too, Grim and I, AKA The Cesspool Soldiers are gonna be working on our first album as C.S. Just a lot of grinding in the coming months and years from the Cesspool. So keep your eyes peeled and ears to the Underground because y’all aint never seen anything like us and our CESSPOOLIGANS! Much love for the Interview and it was a pleasure Thank you for taking the time to check us out and supporting us!

G.S.: Im currently working on some sound design for an upcoming project called “back to basics” with Canna CDK. Its gonna be an E.P. and worth looking out for! We also teamed up with Canna’s crew on a mega track called “heads of the hydra” which is deffinitly something to look out for this year! Lots of new stuff coming!

Music can be purchased here: