“As a Japanese expatriate in Norway and a musical artist who has performed across Europe, Sienná might be considered a woman of the world. Yet her nu-jazz music speaks of other worlds, other states of mind, of distant memories and faraway places. Using studio, synthesizer and software as tools, she draws upon a musical upbringing and diverse influences to create music unlike any other.

As a child growing up in ancient Kyoto, Japan, Sienná dreamt of a musician’s life, yet these dreams were discouraged at first. “Ever since I was little, I’ve spent most of my time listening to music and performing it in many ways.” sienná recalls. “However, I was quite tired of reading musical scores all the time, and being constantly told how often I ignore the scores. I was more interested in playing freely and having fun with it.”

A handful of hobby bands along with experimental synthesizer tinkering nurtured these dreams, but didn’t go anywhere. “To cut a long story short, I was not blessed to do anything with music at all in Japan. In my environment at that time, it was nearly criminal to focus seriously on music.” It wasn’t until Sienná migrated to Norway as a student that her musical dreams began to flourish. It was there that her childhood piano lessons and experiences playing trombone in a brass band and singing in a Catholic choir came to fruition.

After completing a master’s degree in Cultural Science at the University of Oslo, Sienná met producer Abòn through a mutual friend; Abòn saw her potential and got her started working with the Mac-based Emagic Logic Pro software. Since that time she’s recorded one EP and three albums in Abòn’s studio, where she found the perfect creative environment..

As cultural artifacts, musical compositions preserve moments so they can be shared with the rest of the world. “Music is my method to remember the past experiences, memories, impressions, views, feelings and so on,” Sienná explains. Translating the complexity of her recordings to live performance was a challenge at first, but ultimately one that paid off, as Sienná has enchanted audiences audiences in Norway, UK, Germany, Poland, Italy and Japan. Much to the delight of club crowds, Sienná brings improvisation into the mix. “Q.o.S” is Sienná´s 6th release/4th full length album.”  (Text by Keith Walsh/Synthbeat.com) 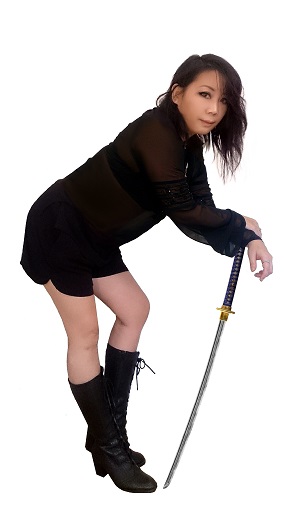 Ans: It´s really like writing a diary. The 10 best written stories get the final seats on the album. . I cannot see the point of making music if it was a stressful process. As an indie artist, I only do what I want when I want. At least one very positive thing.

Ans: It can be anything from a tiny snowflake I saw this morning, to Donald Trump. Like you can write anything you want on your diary, I can write a song about anything – it depends on what happened around me, and what I felt about it. My favorite part is that it´s my music, my world, and my freedom.

Ans: My motto is – according to Japanese proverb – “Nanakorobi yaoki” which literally means “Fall seven times and stand up eight” – you stand back up everytime you are beaten down.

When it comes to music… I follow what my old friend Derek Sivers said “Whatever scares you, go do it”. It has helped me countless times.

Ans: At the bar – Rick Astley “Never gonna give you up” – kidding, I mean, for example, Riton “Rinse & Repeat”.  In the car – go for the classic Queen “Bohemian rhapsody”

Ans: Ryuichi Sakamoto. I love his originality. He has a solid belief in what he keeps creating. On my new album “Q.o.S”, I wrote at least 3 songs that was directly or indirectly inspired by Arthur Brown. I appreciate him for that.

Ans:I´m working on remix and remaster of my existing EDM songs for future release. I´m DJing now, so I want to make my songs more suitable for use on the danceloor. I´m also performing at The Cavern Club in Liverpool on 31. May 2017. I´m a life-long “eager” The Beatles fan, so it´s almost surreal.

Q:Do you have any advice for anyone wanting to perform as a career or just advice about careers in general?

Ans : There´re many ways to do music. Know what you want to achieve first.

If you are like me – if you try to focus on the creative side, try to get your finances in order somehow to start with. It means that you have 100%  freedom to do whatever you want in your creative music career. Do whatever you believe is true and correct for you, not for the others. It will make you happy.

If you want to be famous, consult someone else than me.

Ans: Keep smiling, keep performing, no such thing as a mistake. It was meant to be. Just an additional psychedelic “trick” you do!

Ans: I try to have time to sleep, but to be honest I cannot have so much time to sitting on a couch and watching TV series. Like Pablo Picasso said ‘Without great solitude, no serious work is possible.’ – a lot time spending on my own to create something . My family and closest friends know my routine, and vice versa. So we have always worked it out well.

Thanks for the opportunity, it was fun!