No Last Chances. a solo project that started 3 Years ago. Since then I have been recognized by Google, Legator Guitars and many more companies. I will never stop until I have perfected my craft.

Ans: A Blend of Rock And Rap

ANS: Yes, I write every part of my own songs, it’s a solo project after all. I draw a lot of inspiration from bands attitudes towards recording and writing music rather than the content itself. Band that try something different every time, take care and put effort into their craft. Band that have that drive to attain perfection in every note rung/sung or hit. These are the aspects of artist I admire most. My favorite part of everything is surprisingly the mixing and producing. getting to mix my own track and having the full control to shape the song to how I want it to sound. Most times just recording a song isn’t enough to get it the way you hear it in your head.

Ans: I have actually just put out my second album “A Step in the Right Direction”. This took a long time to write, record and get everything to sound exactly as I had it in my head. I lost a lot of hours, sleep and money doing this but the end result made everything worth it. I also have some cover songs that I will be putting out soon and the first one I can say will be Imagine Dragons – Thunder.

ANS: I started playing guitar 10 years ago when I sold my toys as a child to pay for my first electric guitar. I’ve never looked back since. I stared playing because I admired al lot of musicians like Slpiknow and Link n’ park. I wanted to learn their songs and play along with them. I just had no idea music would turn into this insane passions I have now

Ans: I play/do a few things. I play guitar, bass, drums, keyboard. I sing/scream/harmonies and I get heavily into the back end of music too, like recording, mixing and mastering. I want to be able to controls and contribute to every aspect of my music, so I want to know the ins and outs of everything that is involved with putting out a single, from start to finish. 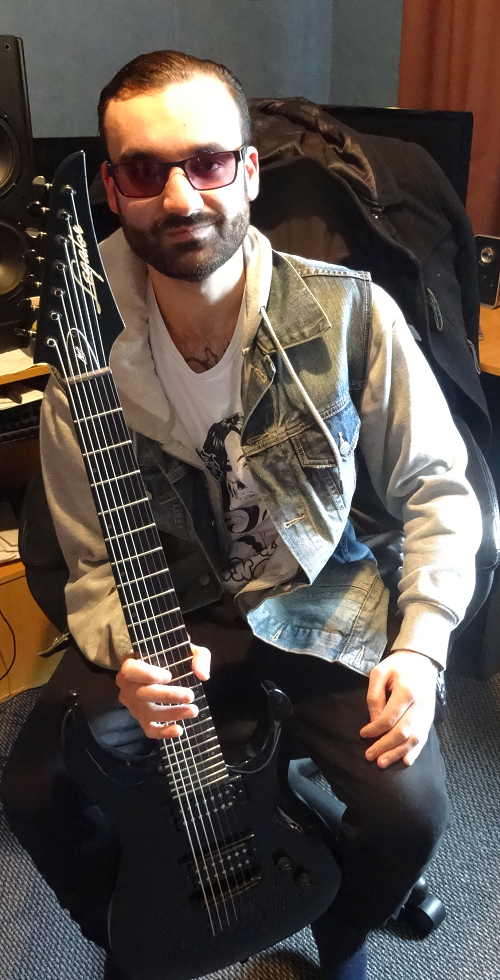 Ans: I grew up from a very musical family, nearly everyone plays something, but no one every taught me anything. To this day I have family members who can sing better, play saxophone, do amazing things musically but I still haven’t gotten any “tips or tricks” from them yet. Maybe one day they’ll teach me how to be as good as them.

Ans: I admire bands like Issues, Memphis may fire, Attila . This is purely because in the digital age you can talk to people you admire from across the globe, you can watch videos of them giving advice to their fans and anyone willing to listen, they can interact with as many people as they want to, but some people still don’t. It’s the bands, artists, singers that chose to do this I admire. The ones that still take care and respect their fans after years of loyalty. These artists are always willing to listen, help and interact with fans and I think that’s so cool because I want to be like that and through this I’ve had the chance to talk and get advice from artists I resects and admire.

Ans: Yes. My dad was very into music to wind down when I was a kid so I would hear a lot his records blasting through the walls, which is probably where I get some of my weird musical style from. I would hear a lot of ACDC, The Clash, The Beatles, Abba, Blur, the crarpenters. I real mix of artists. My father was never one to limit himself to one genre of music. So I try not to when I write. I see some bands write the same thing, for 4-5 albums. That’s fine if that’s what you WANT to do, but for me I hate limiting myself. I want to be the best, and that doesn’t happen by putting self imposed limitations on yourself.

Ans: I always try to better my skills as a guitarist, better my vocals etc, but I don’t practice really. With guitar there isn’t much out there that I can’t already do on it. So I’ll challenge myself, I’ll come up with a new riff or lick that is insanely stupid or hard to play, and I’ll sit there and play it, over and over, faster and faster, until I can do this thing that I couldn’t do, that I have never seen anyone else do. Sometimes this takes hours, sometimes days, but I keep at it, until I get it 110% down.

Ans: sleep, losing a lot of my sleep. Also deciding to put down a lot of my pass times that didn’t aid me in my music career. Obviously I didn’t stop playing guitar, but I stopped watching as many movies and anime as I used to, I stopped playing video games almost entirely. These things were fun and hard to give up but ultimately it was something that needed to be done to be able to do the things and achieve the goals I have done now.