Ans: Quite easy, but it’s mostly when I least expect it. The majority of the time it’s when I am doing basic chores around the house or making myself a coffee. I then quickly pull out my phone and begin recording a voice note, then revert back to it later on and if I like it, that’s when I decide to take it further.

ANS: I tend to draw my inspiration from the things do, see or hear for example stories from friends etc,

I like to create a character almost out of the story I am telling, sometimes I place myself in it, sometimes it’s someone else I imagine playing the role. Am quite a visual person, so for example I can see the music video before the full song has even been written.

The favorite part of the whole process for me is playing live, it just fills me with this energy that I find hard to describe but it’s somewhat addictive.

Ans: I can see myself performing with anyone who shares my vision and musical taste, music for me is a form of connection so if we connect there is no name I can rule out.

Ans: My new favorite song to Perform live is ‘Pa Lo’ . It’s so energetic and it has a switch halfway through the song that adds a dope vibe, it’s the second song on the tracklist to my brand new EP called Tres and it’s produced by SJ The Tailor. 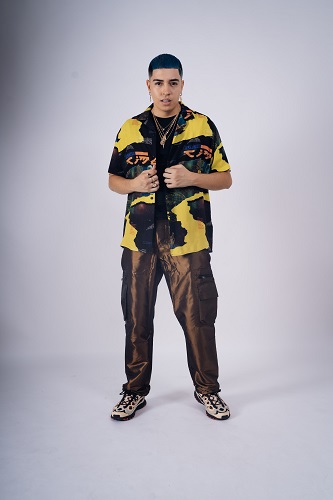 Ans:I have an event this Sunday 22.11.2020 at 8pm UK time. Due to COVID we can’t perform to crowds at the moment so my team and I have put together a virtual online concert for all of my subscribers.

Ans: Not musical, but for example my Grandmother loves singing, she even plays the piano and at the age of 94 she is a huge inspiration for me in the sense that she just loves music, My Dad is a huge music fan and has played instruments for bands in his early years.

Ans: I look up to many artists, but one artist I have grown up admiring is Daddy Yankee. I grew up listening to his music and he has inspired a generation of artists in my genre, he has done so much for the Reggaeton scene globally. I think it is mostly to do with his story and how he has made himself who he is coming from the bottom.

Ans: I was surely influenced by So Solid Crew’s ‘They Don’t Know’ CD Album. I grew up in London from an early age after moving over from Colombia where I was born, I was just beginning to learn to speak english, so from classmates, at school, I remember getting hooked on listening to this group of artists. Their music was so raw and full of energy. it was actually the first physical album copy I went out to buy.

Ans: Mistakes are part of the learning process for me and being on stage is a journey, so I just keep the performance going. I would ignore it and learn for next time, that way it doesn’t mess up my energy on stage. Music isn’t supposed to be perfect.

Ans: As funny as it sounds, it’s almost like a superhero because working is key as an independent artist like me to be able to fund the career from the ground up, so in some respects, I feel obligated to separate both so my days don’t clash and I can prioritize,  but yet you have to understand the value and obligations that come with both. Hopefully, very soon music can be the only one to drive me forward. It’s particularly hard with friends and family because time is so hard to find in such a tight schedule, but most of my friends and family members are really understanding of my situation, so when we do meet up do something together, it almost feels extra special.