When did you move from Paris to LA, and why did you decide to move there?

-I moved to California in 2016. I grew up listening to American rock music (Hendrix, The Stooges, Guns N’ Roses….) and I’ve always wanted to live a musical experience in a new country. Los Angeles is an amazing city because there’s so many musicians and places to perform, even though the competition is strong. The proximity with the film industry in Hollywood is a big plus, I’ve met a couple of filmmakers and photographers who helped me with my solo project. Everything seems easier here. And the weather is super nice!

You’ve worked as a session player for many years. Did you play on anything that we may have heard? Have you played with, or performed with any notable acts?

-I’ve done a lot of session work back in France with some pop artists. In LA I’ve been trying to record with as many people as I could. Mostly local bands and music for movies. I still haven’t played for a real ‘big’ artist but I’ve been able to survive in this city doing what I love, which is playing my guitar. I’m mostly focus on my solo project these days, I’ve become more a producer than a session player.

Your style has been described as “Rock N Roll House Music.” How did you come up with your style? Who are your biggest influences?

-I’m usually not a big fan of those type of labels but I’ve found this one pretty funny. I spent my teens playing hard rock, I still love AC/DC, Led Zeppelin, Deep Purple….But when I moved to LA I started listening to a lot of electronic music, specially bands such as The Prodigy, Pendulum or even Skrillex. People usually think that making ‘electronic’ stuff is easy. But it’s not. Producing a decent track takes a lot of time and dedication. Some people started descring my music that way because I use some typical ‘house’ elements in my songs (synths, build ups, effects, vocal samples…) but at the end of the day it still sounds heavy and rock n’ roll. I come from loud music, and even when I’m making a dance track I can’t help throwing some big guitar riffs and some ‘agressive’ sounds in here and there. I’m learning and experimenting everyday, I just want to create something fun that’s a bit different from classic rock or typical ‘EDM’. 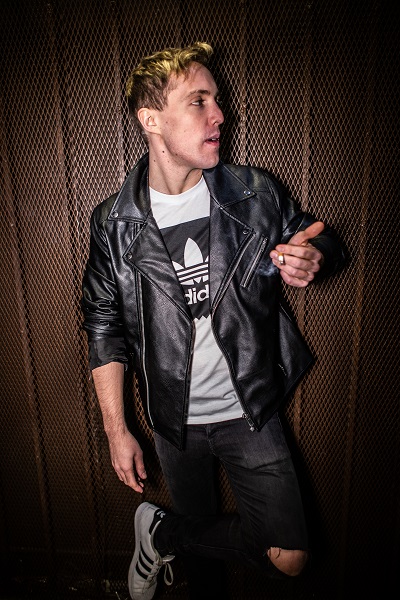 Your new single is “Time On My Side.” Can you tell us about it? Tell us about the album that you’re working on, too. What should fans expect when they listen? Where was it recorded? Take us behind the scenes and describe the writing and recording process…

-I have no step by step process when it comes to recording a new song. In this case, I’ve found a vocal sample in a folder somewhere in my laptop. It’s a robotic distorded voice that keeps repeating ‘Time on my side, never gonna hide’. I really liked it and I started building a drum beat and a bassline around it. Then I usually add some synths (with a lot of distortion/detuning) and some guitar gimmicks all around the place. It’s a pretty straightforward song, with a punk vibe and a lot of cowbell. I record everything in my bedroom with an old computer and a guitar. DIY is the way to go for me.

What should fans expect from your live sets, and do you have any plans to tour in the near future?

– I’m trying to keep this ‘hybrid’ mindset about every aspect of my music. I’m basically doing a live DJ set while playing hard rock guitar parts. I’m backed up by a real drummer to keep this ‘organic’ rock n’ roll feel going during the performance. I will have to go back to France for a few months to fix my immigration status. While in Paris I will finish my upcoming album and rehearse for the live. I’m planning to tour in California by the end of 2019 to promote the album.

– You can find more about me at: https://jeff2music.com

BONUS: What do you like to do outside of music? If I were to come over for dinner, what would you serve, and what movie would we watch afterwards?

-I’m a basic guy, I like to go out hiking in LA, playing soccer and partying with friends. I’m a terrible cook so if you come over we will probably have a couple of beers and order some take away food! Then let’s watch ‘The Dirt’, the new movie about Motley Crue.