Blaine Kaltman is the genius behind the critically acclaimed hard rock outfit Stone Mob.  He writes the music, lyrics, and videos and his guitar playing has been hailed as some of the best there is in too many music magazines to count.  Stone Mob recently replaced their singer and sounds better than ever.  We took the time to talk to The Shred Master General about this and other things Stone Mob.

Q:   Let’s get right to it.  You recently changed singers.  We have our suspicions but tell us why?

Ans:  Doug Masterson is no longer singing for Stone Mob.  He’s a talented singer and I wish him success in his future pursuits.  But we’re very happy to welcome singer Matt Ross to our rock and roll family.  He’s an amazing guy and considering he’d only had a few days to prepare for our first show- I think anyone can see he is super talented.

Q : I agree completely.  We were blown away with Matt’s performance.  But I’m going to call bullsh-t on everything else you just said.

Q:  Because we can see Doug is extremely bitter.  He publicly posted some pretty salty stuff on your Stone Mob Facebook page including saying “lame” on the video of your recent show- which everyone can see was anything but.  You guys rocked it!

Q:  But Doug is clearly bitter and resents your success.  Why else would he criticize such a phenomenal performance?  You guys sounded better than ever!

Ans:  (Blaine sighs and shrugs but says nothing).

Ans:  I suppose you’d have to ask Doug.

Q:  We don’t interview has-beens.  Does it bother you the way Doug’s acting?

Ans:  Not really.  I feel bad for him but he’s going through something right now and…I guess this is just his way of dealing with it.

Ans:  (Blaine laughs but I can’t tell if he honestly thinks this is humorous or is just hiding awkwardness).   I thought those were just smiley faces. 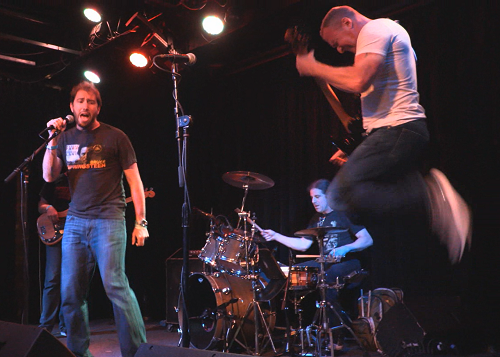 Q:   Did you fire Doug because he wasn’t cutting it live?  Or didn’t have the right look?

Ans:  Look…I don’t…I’m not sure what you’re looking for…

Q:  The truth.  Your fans deserve an explanation.

Ans:  Look, I’m not into washing my dirty laundry in public.  OK?  I think the fans can listen to the music and decide for themselves.

Q:  Well on that I think they already have.  Your new singer is an absolute monster on stage.  He reminds me of Paul Rogers or Lou Graham- just impeccable delivery, great range and great charisma as well.  So, no one is second guessing the choice to replace your old singer.  Frankly I had wondered why you always spoke so highly of him in interviews when, no offense, most of your live performances were undermined by his lackluster performance.  On your studio tracks he demonstrates some power and range but your YouTube vids- Murder town live for example- he doesn’t sound anything like he does in the studio. He’s missing notes- singing out of key, getting lyrics wrong… it denigrated your otherwise…

Ans:  Look, it’s not easy being on stage. (Blaine interrupts me).   Ok? And the songs I write aren’t easy to sing.

Q:  Matt Ross seems to be able to handle it.

Ans:  Yes.  I agree.  So…yes.  I felt Matt would be a better fit for Stone Mob.  But that doesn’t take away from Doug’s ability as a singer.

Ans:  Well he was the Earthdog.

Q:  I like how you put that in past tense.

Q:  Well you’re STILL the Shred Master.  And that last show was amazing.  Tell me about the middle song- Take me home again?

Q:  Great track.  Fantastic track.  Definitely my favorite Stone Mob song to date.  The solos were off the hook and the chorus is just so catchy.  I absolutely loved it.

Ans:   Thank you so much.  That song is really close to my heart because I’ve spent so much of my life living abroad.  12 years as a Foreign Service Officer, 5 years before that in China, did my PhD in Australia…I’ve bounced around a lot.  But there truly is no place like home.  Also, that was the first time we performed Home Again and it’s been a long time coming because I actually wrote it when I was sixteen years old.

Ans:  Well, the chorus anyway.  The versus I wrote recently.  But when I was sixteen I spent a summer as an exchange student living with a family in Istanbul.  As you can imagine being a teenager alone in a culture that wildly different- I mean, no snickers bars or pizza or TV- it was a character building experience and I love my parents for pushing me to do it.  But when I was sad I used to sing the chorus in my head to cheer myself up.  “Take me back to home again, take me back to see my friends, I’ve been gone to long and I can’t pretend, I got to get back home again.”

Ans:  (laughs)  You should hear the stuff I naively wrote about sex.

Q:  Are we going to get a studio version of that song?  It’s been a while since you guys released any new material.

Ans:  Absolutely.  We’ll be getting in the studio again shortly with our new singer.  We have several instrumentals recorded- we just need to do the vocals and have them mixed.  And I have some videos in mind as well.

Q:  We can’t wait.  Thanks so much for talking with us.  Sorry if it was a little rough there at the beginning.

Ans:  No worries.  I know how you news people are.

Ans:  Just…Thank you for the support.  Stone Mob is nothing without you, and we will keep doing what we do:  churning out the best high energy rock and roll we can make.

Visit Stone Mob and check out their incredible new singer at  https://www.facebook.com/stonemobrising/