We will most likely always live in Gainesville FL because Gainesville is a great place to live. We all have careers and families here.

Q : Your song “Dead Or Locked Up” hits home for many people, you address some serious topics that a lot of fans can relate to. How has music kept you off the streets / out of jail?

I was born in Miami. My sister was raped and murdered when I was 2. My father died four days before Christmas when I was 6. My mother tried her best to raise my sister and I but a few years later she fell into a very abusive relationship. She turned into a serious working alcoholic and could not handle the situation. When I was 11 years old I was pretty much on my own in a family home with no one in it. Rap and Hip Hop had only been around for a few years and once I heard Rakim, The Fat Boys and Run DMC, I knew it was for me. I started Beat Boxing and writing raps every day. Soon I started freestyling in the hallways and in rap battles.

By the time I was 13 my mother moved out completely. I was selling drugs and running with some bad people on the streets. I still Beat Boxed and rapped every day to train my gift. I did a lot of things I am not proud of. By 20 years old, I lost a few friends and a few went to prison. I got tired of the thug life by and turned to music full time. Writing songs and making beats. I found some friends who also wanted to make music and that is what we did. We formed a band. Music gives you something else to do and it can take up a lot of your time so you don’t have time for trouble. Recording in a studio and doing shows kept me out of trouble. I have written and produced over 150 songs since then and it never gets old getting that check from iTunes, Spotify and all the other sites our music is sold on. 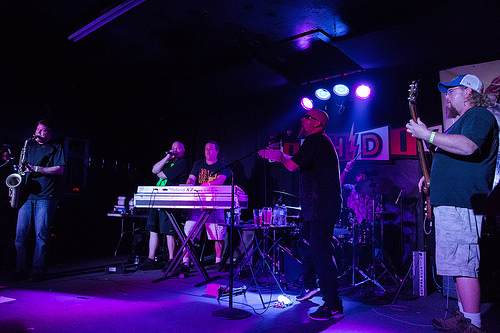 Q : What is next for Funks Incorporated? Can your fans expect a new album any time soon?

Funks Incorporated is finishing up in the studio and trying to put together a few music videos and some tour dates. We have our 5th band album coming out hopefully in October or November of 2017. The album is titled ” We Got That Funky Hip Hop” M.C. FUNK has a Solo Album being released in October 2017 as well, titled “Enter If You Dare”

Q :I hear many old school EmCee influences in your music, who is your #1 EmCee?

My favorite MC and Mentor has always been Rakim.
The G O D!!

Q : Can your out of state fans expect to catch you in concert any time soon?

Hopefully in 2018 we will be doing some shows in other states.

Q :  I checked out your solo music and really dig the variety you offer. What do you enjoy most, writing your personal solo music, or working with your band?

Hard question. I just love writing music and writing different music all of the time. If I was forced to pick one, I would say I like my band more because of the camaraderie and the many different styles we produce. Plus playing live music is the BEST. My band is crazy like me and they love my Solo Rap and Beat Box Albums so they push me to do it.

Dead Or Locked Up