Shania the artist has been on the Atlanta scene for over a year now since she started her music as a little girl… her father was a traveler and she never settled in one place for too long making her adaptable to new places wherever she goes.. moving from New York to Miami, Miami to Maryland, and now Maryland to Georgia, she’s decided now is the time to take her music to new heights since her mom begged her to pursue it before passing of breast cancer in 2014. Shania has since then expanded her brand and jump head first into her music officially launching singles such as “50 SHADES NASTY” which currently has a music video out and her newest single to release in MAY 2017 “IN YOUR DREAMS” which has gained a local craze amongst fans who got a sneak live perfomance before the release at events in the area. She is now traveling to numerous states to grow her fan base and give her listeners who’s been begging to see her globally, a live experience coming up soon in her 2017 and 2018 plans.

Q:  When you decide it’s time to make a new record is it exciting or stressful?

ALWAYS EXCITING! I get to craft what I’ll be singing and I rough draft it out, listen for a few days, fix what needs to be done until I’m happy with it, then go into the studio… its when it’s time to lay it down in the studio that makes it so nerve wrecking cause I critique myself hard on my sound.

Q:  What’s your motto or advise you live by?

Keep going no matter what. If you allow what people say or feel about you to make you second guess yourself, you’ll never achieve anything in life.

Q:  Does it suck cause they may not like you or what you do?

Yes. But when you’re looking back do you want to have a what if ? I know I don’t.

Q: For your readers who have never heard your music, explain your sound in 5 words?

I DRAW IT FROM WHAT I FEEL SOMEONE CAN RELATE TO SEXUALLY, plenty of things people want to say but afraid to say it because we were taught to speak on certain things like sex. But that’s how we all were created so it shouldn’t be so sacred. My favorite part is I dont write my songs on paper it goes from my head to a rough singing sample on my phone. I listen to it over and over again and add things and take things away until I’m obsessed with it. If I want to listen to it then I know others want to listen to it as well.

Can I say everyone? lol there’s no barrier to what genre I want to perform with and cross over to but to name a few, rhianna cause I love how spicy her attitude and style is, but then Beyoncé for her classiness, yet Nikki Minaj for her uniqueness… I’m a mix of all in one. 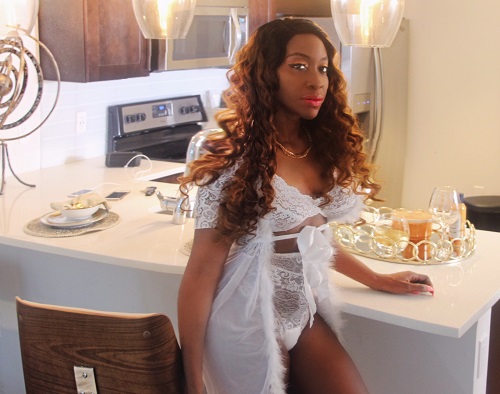 Yes I just released the music video for “50 SHADES NASTY” which is my best yet… and my official coming out songs from all the other ones I’ve don’t before. And my new single “IN YOUR DREAMS” is schedule to release in MAY which is about not being able to physically be sexual with a man (or woman lol) though I want to, but to how it’s hard to trust people it’s better to do it in his dreams.

Q: Do you have any advice for anyone wanting to sing as a career or just advice about careers in general?

Yes two actually. The first is It is a lot of work and nothing is gonna be given to you without proving yourself and people seeing what you can actually do, this takes time so don’t worry about how long it takes, worry if you’re enjoying the ride instead. And being an independent artist takes a lot especially on your finances and your budget, people on the outside expect you to have certain things or be in a certain position because they’re on the outside looking in so do YOU.. not to please anyone cause they’ll never understand from the side they’re standing on. Only you will know how much you’ll have to take on the path you’re on so stay focus and never worry about how they feel, your fans matter the most, the ones showing up to events and buying your music… on lookers are just that, lookers.

Q: Do you get nervous before a performance or a competition?

YES! As much as I’ve been doing this for so long I still get butterflies lol… I worry if I’ll mess up or do something out the norm and then once I get on the stage I let go. We’re all human so if I do mess up I just keep going. You want all of your performance to be the best but again we’re human brush it off and keep going.

(Laughs) I get this question a lot, cause they say I’m super mom (laughs again) making sure the kids are good and doing my music, booking events, and lining up all the other things that come with my music (shows, videos, interviews, studio time, appearances, etc) all while being a single mom. Well my answer is I HAVE NO IDEA! I just know it’s want I need to do and have to do and want to do and just do it! It doesn’t seem hard to me cause I love doing it, every part of it… if you complain about it or don’t like doing it, then you should ask yourself is this really what you want to do? Everything I juggle with my music, kids, and obligations are what I want to do and so, it doesn’t seem “hard”

Q: Do you perform in public? Describe those occasions? Concerts, radio, TV?

YES! You have to perform to get yourself out there it’s apart of the music business plus I love meeting new people and fans who love me. I’m mostly in the Atlanta scene right now but I am now traveling to FLORIDA, NEW YORK, the DMV (d.c., Maryland, Virginia) area soon… I have a couple of gigs set up on the making and I’ll be announcing it as they come in officially, and of course my goal is to tour all over the world soon as my fan base grows like it’s doing now.