The gifted and humble Or Shahar, gives us a glimpse inside his world as an international musician –which includes balancing his work and taking time out for himself too. Here is what he had to share with the readers:

What have you been working on since you have been in the US?

Since moving to the US, I have been playing live performances along with studio work as well. I recently shared the stage with Jason White, ‘The King of Persian Pop’ Shadmehr Aghili. Since 2017, I’ve been working with Score A Score and Movia on original music for TV and Ad campaigns.

When you first got to the US, did you find it a culture shock compared to where you grew up?

I spent some of younger years growing up in Vancouver, Canada so I actually felt pretty comfortable. After spending recent years overseas, I definitely needed to adjust to the local environment, but moving back to America was very natural for me.

What are some of the best places you have played at?

Last December I played a show at the MGM Grand Arena in front of 17,000 people. Playing in such a big venue was exciting and the crowd’s energy was felt throughout the whole show. I also played at the Taste of Soul Festival, which draws 350,000 people -and was a personal highlight for me.

What was one of your most memorable experiences?

A couple of months after arriving in LA, I was called to produce a show and play at Universal Studios main stage at CityWalk. It was my first live performance after moving and playing with new people -I still remember the preparation and excitement building to the day of the show. 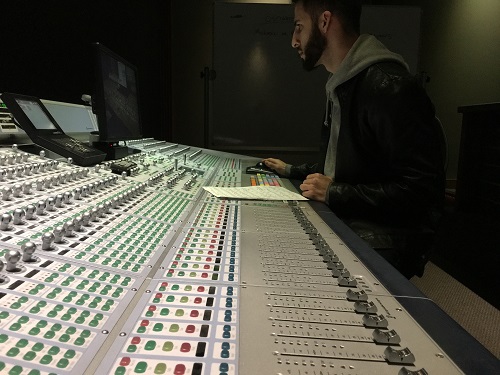 What is a day in the life, like for you? How do you prepare for each gig?

I try to wake up early and organize my day to a normal schedule, especially when preparing for a new project. Musicians can get sucked into working crazy hours, long days -and flipping your internal clock can lead you to be unproductive.
After breakfast I start to warm up, practice and learn new material. I take a lunch break and continue to practice till the evening. When needed, I will play a full set after dinner until I feel comfortable and my parts are polished.

What would be your dream venue to play at?

Madison Square Garden. I have had several dreams of playing there when I was younger -and I believe a lot of artists and musicians will agree with me that MSG is a bucket list venue.

What would be your dream collaboration be? (Who you would most like to work with)

As for playing guitar, I would love to play for Justin Timberlake. I’ve been a fan of his music for years and his band – The Tennessee Kids always sound amazing live. Their live arrangements really set the bar when it comes to taking a recorded album to a live show.

What do you believe are the keys to success and sustainability in such a tough business?

I think the music business is constantly changing, and has changed vastly from where it was in the past decades. Today, the focus is not only on your musicianship, skills and technique etc -but on you as a person. Socially, connecting, being a fun collaborator and friend may get you further than just playing fast guitar riffs. More so, technology is developing faster than ever so keeping up with the recent changes and what to expect for the future, is a must to succeed.