Jay Burger is an Up and coming comedian just trying to make it in the big world show the love support and it will be return anything can happen.

Do you write your own routines?

Yes all my routines come from my mind. I record myself and listen to everyday adding and editing until I have the perfect set.

Where do you get your material?

Most of all my material comes from my life or the things I witness after i put myself in that position.

What happens if people don’t laugh?

Listen the show must go on I can’t count how many times I’ve said something and seriously thought it funny only for it to be met with silence you move on the next one it happens. 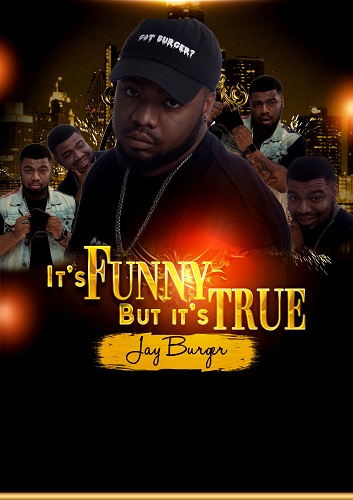 How do you deal with hecklers?

I make them part of my routine one of the keys to comedy is being able to adapt and think on your feet most hecklers are aren’t liked by the crowd use that to your advantage you get a good 10 minute out of a heckler. If you can’t take being yelled and talked down to or cursed out how will you ever be ready for marriage.

How do you shut things out?

I’ve been shutting things out my whole life so it comes naturally to me at thia point but if I had to describe it i simply dont read the news there’s always someone out there who going to be against you there going to say your not funny enough well you don’t worry about them you focus on the people saying when’s your next show you build a relationship with those who support you.

How can we find you on social media ?

The people surrounding me are my inspiration they keep me going. A comedian by the name of Hassan Oliver I own a big thank you too he gave me a platform and help me grow into the comic I am today.

Do you perform in public? Describe those occasions? Concerts, radio, TV?

I have actually I’ve perform so much that’s it’s hard to pick one however August 16th will forever hold a special place in my heart I stepped out my role as just another performer and became the creator for the first time ever I had together my own show and called it Welcome to the Movement more than anything else I will never forget the goosebumps I felt after the show having people coming up to tell me what a great time they had that feeling was phenomenal. Comedy is something im very passionate about which is why I’m proud to announce January 12th I will be doing my very first 1 hour special in NYC at the Playroom Theater.

What advice would you give to beginners who are nervous?

What your feeling is natural there are no such thing as overnight success stories practice your craft maybe writing not your thing I record myself everytime I think of joke put thoughts into action you’ll never grow until you touch that stage and most importantly find yourself a team of people who has similar goals as you remember 1 man can make a difference but a team can make a miracle.