Since their 2003 breakthrough, Hate Crew Deathroll, Finland’s Children of Bodom has been a staple of the international metal scene, thanks to the high-speed shredding of frontman Alexi Laiho, the precise interplay between the guitars and prominently-featured keyboards, and their relentless touring schedule. Their latest, I Worship Chaos, is the band’s first album recorded as a four-piece, and the stripped-down lineup resulted in what editor Thom Jurek hailed for its “very sharp teeth, a nasty disposition, and a hell black sense of humor” in his four-star review.

We spoke with Laiho about some of the stylistic diversions on the album, treading the line between delivering what people want and what he’s interested in writing, and why he likes to swear so much onstage. 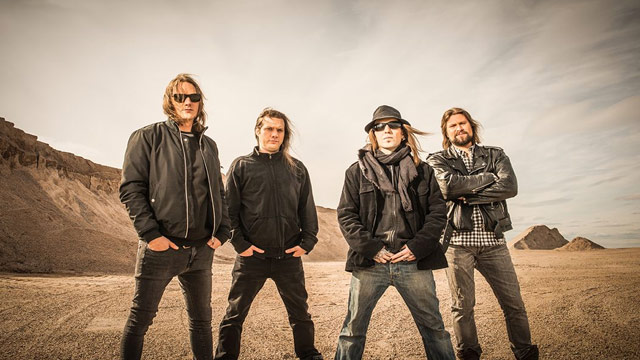 SntMag: When you decide it’s time to make a new record, is that more exciting or stressful?

Alexi Laiho: It’s both nerve-racking and exciting, for sure, that’s definitely the hardest and the most difficult part in the whole playing in a band bit. It’s the hardest thing, writing a new album is the hardest thing in life, basically. That’s why I really need to shut everything out so I can concentrate on the music and make sure that I don’t think too much and so everything comes out naturally.

SntMag: How do you shut things out?

Laiho: I think I’ve just learned how to do it over the years. I’ve always been good with blocking things out of my head, I’ve always had a knack for it. So what I do is I just really try not to think of anything like what we should sound like or plan what the new sound would be like or just think about stuff like what the fans expect or what they want to hear or are they going to like this or that, I don’t think about any of that stuff, I just go and do it and hope for the best.

SntMag: How easily do songs tend to come to you?

Laiho: I can come up with an idea while I’m driving a car or doing laundry or whatever, so I get inspired all the time by so many different things. Then sometimes if I don’t have anything, you just sit down with a guitar and start playing and see what happens, sometimes I just play for hours and hours without getting anything out of it, really, as far as music goes. Then all of the sudden I’d find myself repeating the same thing over and over and say, “Oh, there’s a riff,” and I start working on that and once I get the first riff of the song, then that always makes things easier. When you don’t have anything and you start from scratch, that’s always the hardest part.

SntMag: If you’re really not worried about expectations, do you think you could get away with making a record without guitar solos?

Laiho: Probably not. People ask me, “How come there are less guitar solos on this one than any of the other albums,” and I don’t know, nobody seems too upset about it. My answer is that this time around we just did what serves the music, and as a guitar player, I want to do the same thing. If the song is perfect as it is already, why would you want to force a guitar solo part in there? I don’t want the guitar solo to be a necessity, it needs to be something that serves the music. To me, that makes sense.