Ans: Cocky and Over the top. I think that would be the best way to describe it.

Ans: I would definitely say it’s more stressful, because I like always need to constantly better myself, I cannot have something that is the same or worse than what I previously released. Haha so I always try and find a way to bring something new and unexpected that they never heard in the last project, and it’s seriously stressful sometimes because I would be unable to know which direction to take with my project, because it would either not be as hard hitting as my last project, or just as hard hitting as my last project, but would never seem to go over that standard, so it takes me quite a while to finally find that point that I say, YES THIS IS WHAT I WANT, haha so yeah, it’s tough, but I feel that if you ain’t tryna better yourself, then there’s really no need to be doing the same thing over again because it wouldn’t be fair to your fans to be given that same stuff on every project.

ANS: Yes I do write all my own music, well Its basically when I’m sittting in the studio, and it’s that whole process of listening to that beat over the studio monitors, and you hear every kick and snare, every synth sound, and I sit there as the beat is playing, and while I’m sitting there surrounded by the studio’s atmosphere at this point, it’s like the words and lyrics just come so naturally. That’s how I get my Inspiration to write music. 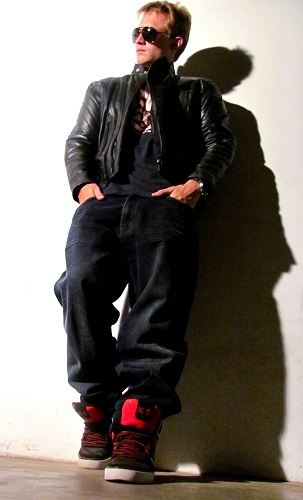 Ans: At the moment yes, I’ve started working on my new single with my friend and featuring artist named Blaeze. So the title of the song is called ‘In The Bank’. I haven’t thought about a release date as of yet, but it will be dropping soon.

Ans: aside from just rapping, I’ve also taught myself, how to play guitar and also how to play the piano.

Q: Which famous musicians have you learned from?

Ans: When I started off my career, I would have to say Eminem, haha most definitely him. Then later on I started checking out the artist called Hopsin, and those two I would say are my biggest influences and taught me a lot because I followed their careers, and learnt from whatever they would be doing in the industry right now. But I would have to say that, every musician out there has something unique that I want to learn from them.

Q: Do you get nervous before a performance or a competition?

Ans: haha Absolutely, I still get slightly nervous every time I have to do a live show. I’m always worried that something is gonna happen and screw up somehow.

Q: How do you balance your music with other obligations – mate, children, and job?

Ans: With great difficulty, haha like having to go to work in the studio while my wife and child are at home, it’s hard man haha, because every time I’m at the studio, I just wanna be at home with them, but when I’m at home, it’s like I need to get back to work you know. So yeah it’s really tough, especially with my son, like right now he’s gotten to that stage, where he’s always wants to be with me, and I swear if I could take him to the studio with me I would, haha me and him would probably goof off all day in that place if we could. But yeah it’s tough to keep a good balance with everything, but what I say is, I’m a father first, before I’m anything else, I would drop everything that I’m doing in that moment, if my son needed me.

Ans : Yeah, just that they should prepare themselves mentally for this industry. Like this industry is tough, and I probably am just sounding like everybody who gets asked this question, haha but it’s like you seriously need to prepare yourself mentally and emotionally for this industry, I mean what you will feel as a work of art, someone will break it down in 2 seconds flat, and it crushes you, haha I mean you will hear more negativity than positive points of view in this industry. That’s one thing you need to be prepared for, I still remember when I first started, it was quiet a shock to me, just how cruel some people can be you know, like they will look you straight in the eye, and have no problem breaking down your hardwork, and with a smile even too. Haha so I would have to say is that you need to be prepared for that, and be ready to face this massive amount of negativity in life, but you know in the end, just always to remember that you not doing it for the wrong reasons, you should always be focused on the love for music, that you don’t lose your passion and love for music, because you will be faced with the challenge later on, which is if you still enjoy music or not, because people can be cruel to you, but don’t ever let that effect your art, don’t ever let that tell you that you are not gifted with music talent. I say that everyone these days with a webcam can easily become a critic now, but that doesn’t mean that they are experts, they are just some kid with a webcam sitting in their moms house, making videos that bash on people, who took a lot of courage to take their art and show it to the world.